The development of theoretical chemistry has depended on developments in physics on the structure of atoms. The preferred practice is to lament the obtuse and stress the abstract. Typical quantum theoreticians approach to other chemists is, “.., the focus of orthodox chemistry, …… strives for pictures that are accessible for the human senses” since “the mathematical concept of the wave function y  is too abstract and too elusive for the human imagination to grasp”. (G. Frenking, Angewand. Chem. International Edn. 42, 144, 3335 (2003)).

Yet it … becomes desirable that approximate practical methods of applying quantum mechanics should be developed, which can lead to an explanation of the main features of complex atomic systems without too much computation. (P. A. M. Dirac, Proc. Roy. Soc., (London), 714)

Even if the “… achievements of modern computational chemistry are astounding”, one still requires “… a simple portable explanation”. (R. Hoffmann, J. Mol. Struct. (THEOCHEM) 1998, 424, 1).

As a long-practising bench chemist, I knew that empirical transferable atomic parameters such as sizes and electronegativity work well. One theoretical physicist (always to be distinguished from quantum chemists) whom I like for many reasons is Professor T. V. Ramakrishnan who drew my attention (more than twenty years ago) to the work of Alex Zunger that dealt with core atomic sizes (A. Zunger, Phys. Rev. B, 1980, 20, 5839). Given the “ab initio” and environment-independent nature of the Zunger-Cohen core atomic sizes, I sought  to reconcile this work with our (chemists’) ideas of the environment-dependent or bonding-dependent ionic, covalent, metallic radii and so on.

My first effort in this direction was a communication to JACS in which I found a simple relationship between the Zunger-Cohen size and single bond distance of all main-group elements. The idea had been in my mind for more than four years before I sent it for publication. It was received with (for me) considerable enthusiasm in a hand-written report by one referee. 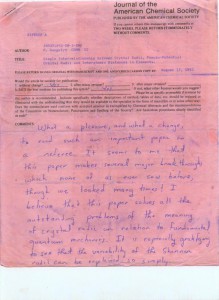 In the face of this report, it became binding on me to find out why the referee thought that way. This paper was followed by two other papers; one was on relationship with multiple bond systems; another was on the way environment-independent interatomic distances could be obtained from atomic sizes, rG, which I obtained empirically. This approach gives the polarity of a bond using atomic sizes and a principle of maximum mechanical hardness, as well as giving the ratio of atomic sizes that is consistent with the coordination number of M atoms in MX solids.

After a lull, this work has been taken up more seriously in order to find a theoretical explanation. It has been difficult to find an explanation acceptable to the referees since the results of eqn 1 cannot be obtained from standard quantum mechanical procedures. The first paper of a quasi-theoretical nature was published J. Phys. Chem (2000) in which the condition m = 0 condition for the chemical potential was shown to rigorously exist as a universal criterion for the energy minimized density optimized state of a molecule. From this condition a simple model was found using hydrogen-atom-like bonding quasi-particles and the Bohr-like model for the hydrogen atom to explain the magnitudes of D+ and D– and thence the bond-length of the hydrogen molecule, and also to relate the dissociation energy, DH-H, of the hydrogen molecule to the binding energy (Eeh ~ 6.8eV) of the positronium atom (DH-H ~ (2Eeh/3). A model was also sought for the “one-third effect” in which

½D+/D–½= 1/3. Implied in this manuscript are similarities with fractional quantum Hall effect (FQHE) and QHE, perhaps a “hidden description” of the origin of S = ½ for electrons, and a “magnetic” Bohr model.

The usefulness of the “magnetic Bohr model” became apparent to me when I found that I could obtain a theoretical model that gave the dependence of FS in eqn 1 on the spin, S, of the number nv, of “extrabonding” valence electrons (S = nv/2) as

Some of the applications of this model has been described in terms of the empirical size, rG. Later we have applied this model using the theoretical sizes, rnZc, (see Atomic Sizes from Atomic Interactions, J. Mol. Struc., 930, 162 (2009) doi:10.1016/j.molstruc.2009.05.008). This paper has gone around several journals in several versions, with the basic idea seeming to be robust and without finding any theoretical repudiation. One such version is attached.  This model does not require anything more than the Bohr’s model and has thereby probably found the least acceptability among quantum theoretically learned referees. As they say in Tamil, parkalaam.

In the new model for atomic sizes referred to above we use the most rudimentary concept of vacuum polarization without going anywhere near the complex mathematics that are used in the nice-sounding quantum electrodynamics (QED). In this model, the interactions of atoms are considered in the presence of a size-dependent interaction represented by a virtual photon or an electron-hole pair, e–h+. This model (again going no further than a Bohr-model like treatment) gives sizes, rnZc, which are close to (within 1%) the empirically obtained rG or the valence s-electron Zunger-Cohen orbital radius.

The interesting point is that DP is the corresponding property of the hydrogen atom.

This size-distinction between insulating and metallic elements seems to manifest itself in an interesting manner. In gas-phase diatomic MX compounds (X is an atom of an insulating element) the description of gas-phase M-X bon d distances for M atoms of insulating elements is different from that when the M atom is that of a metallic element (at NTP). I got Professor Sourav Pal to get his student to carry out DFT calculation. We wrote a paper (one version before publication; P. Ganguly, B. S. Kulkarni and S. Pal, J. Mol. Struc., 936, 1 (2009), doi:10.1016/j.molstruc.2009.07.007 ) in which I coined the terms “static” and “peripatetic” valence electrons of insulating and metallic M atoms with the “charge´transfer” and “neutral” size-descriptions of bond lengths. Further applications of this point to phenomena in chemistry has been studied and is under preparation.

Among my brief collaboration was that with Professor G. R. Desiraju of the University of Hyderabad, who has contributed several original ideas to crystal engineering. One of these is the important idea of supramolecular synthon. I have tried to quantify the synthon characteristics using my insights into non-bonded distances which suggested a distinction between “ionic” or “n-polar” sizes and “neutral” or vDW sizes. This idea was useful in describing (P. Ganguly and G.R. Desiraju, Chemistry Asian J.  5 {2008) 868) intermolecular contact distances in a new manner and should be useful in understanding better packing of molecules in crystals.

In what promises to be a generic model we have obtained 1,3-non-bonded interatomic distances of gas-phase MX2 compounds from a simple linear equation that relates the interatomic distance to a simple function of the core atomic sizes, rG, of M and X atoms. This molecular tensegrity (Current Science (1), 2006; Current Science (2), 2006) model is derived from Buckminster Fuller-Snelson notion and is quantitative once the concept of a tolerance factor or the matching of 1,2-bonded M-X distance and 1,3- non-bonded X- – -X distance is introduced. This model has been applied successfully to more than 150 gas phase MXn compounds (n£4) and more than 400organic compounds.

I have been rather unsuccessful in getting more papers published in this subject despite several attempts. I thought I was really successful in using ab initio sizes, rnZc, to obtain 1,3-distances in X-M-X linkages. This paper took too much time and too many referees for the final decision to come. One stubborn referee thought I was just being lucky even if I accounted for all the compounds listed in the CRC handbook!